On youtube you have a video where you show a workflow to create a procedural building (Making Procedural Buildings in Unreal 5 with Apparance and Quixel Megascan Assets - YouTube). It’s been a while that I didn’t use the plugin and I tried to reproduce what is in the video but it is difficult to follow even if I slow the video to 0.25 of the speed.
Would it be possible to have access to the video with a normal speed?

Ooh, that’s not a bad idea. It was made to get a ‘feel’ for building things with Apparance, but doesn’t cover the details obviously. I’ll see if I still have the source video. I suspect it doesn’t cover enough of the Apparance editor work though as I usually work across two monitors (since it all updates live as you edit). Let me have a look.
UPDATE: Yeah I still have them and they do include the Apparance Editor work as I made sure it was done on a single monitor. There are some gaps and skips but it does show a lot of the process (even my mistakes and having to debug why things don’t work

). I’ll need to splice them together into a single video, and also do a pass on removing any personal information (popups, task switcher, etc). I’ll have a look at getting this done tonight.

Thank you a lot,

I want to do something similar with asset I bought on the marketplace but I didn’t know how to begin. If possible, it would be really good if you make video where you explain how you created the example project or maybe video where you showcase the use of some nodes or usecase a bit like “Mathew Wadstein” blueprint tutorial.
I think it would be useful for me and the other users. After all, Apparance can apparently used for a lot of things (if I’m not wrong you use it to create your website) but we don’t really have informations about how to do it.

Again, thank you for the video.

Yeah, I didn’t think of using it as a tutorial, but it does cover loads of little things like how I’ve learned to use the UI most effectively, shortcuts, and tips on procedure and graph layout. 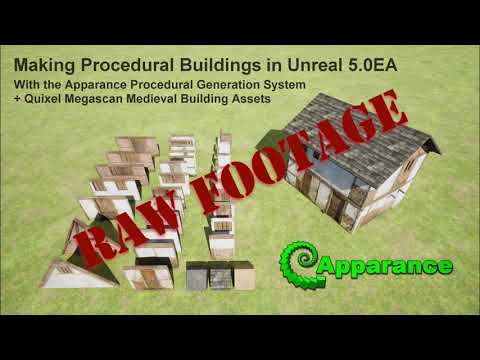 If you have any questions, you can ask them here, or perhaps in another thread under the Procedural Generation section of the forum.